Why are there beetle hits on some of my treated trees?

In the USFS graph below is a measure of how trees are attacked by beetles.  BeetleBlock will significantly reduce ‘Mass Attack’ which will kill a tree the same season.  It is estimated to take 40 successful hits/sq. yd. of surface area to kill a tree. 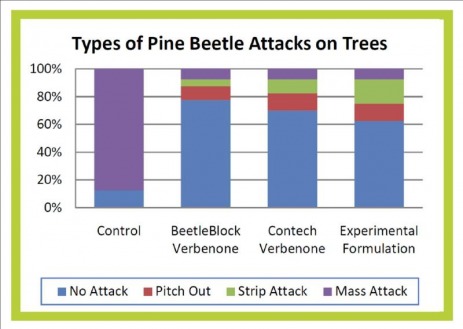 Strip attack is several hits on one side of the tree.  Pitch out is an unsuccessful attack where the tree has pushed out the beetle.  Healthy trees are usually successful in 'pitching out' beetles if there are a limited number of hits.  Clearly BeetleBlock treated trees will sustain some hits.  The goal is to reduce the hits to minimal numbers.

The comment has been made that verbenone may attract beetles.  In the early development of the product some old tests contained contaminants which attracted beetles.  Today’s product DOES NOT ATTRACT pine beetles.

What is the acceptance of verbenone by Federal and State Foresters?

The USDA Forest Service purchased over 185,000 dispensers from 2007 to 2010.   Also substantial purchases were separately made by the National Parks and BLM.  All public documents.